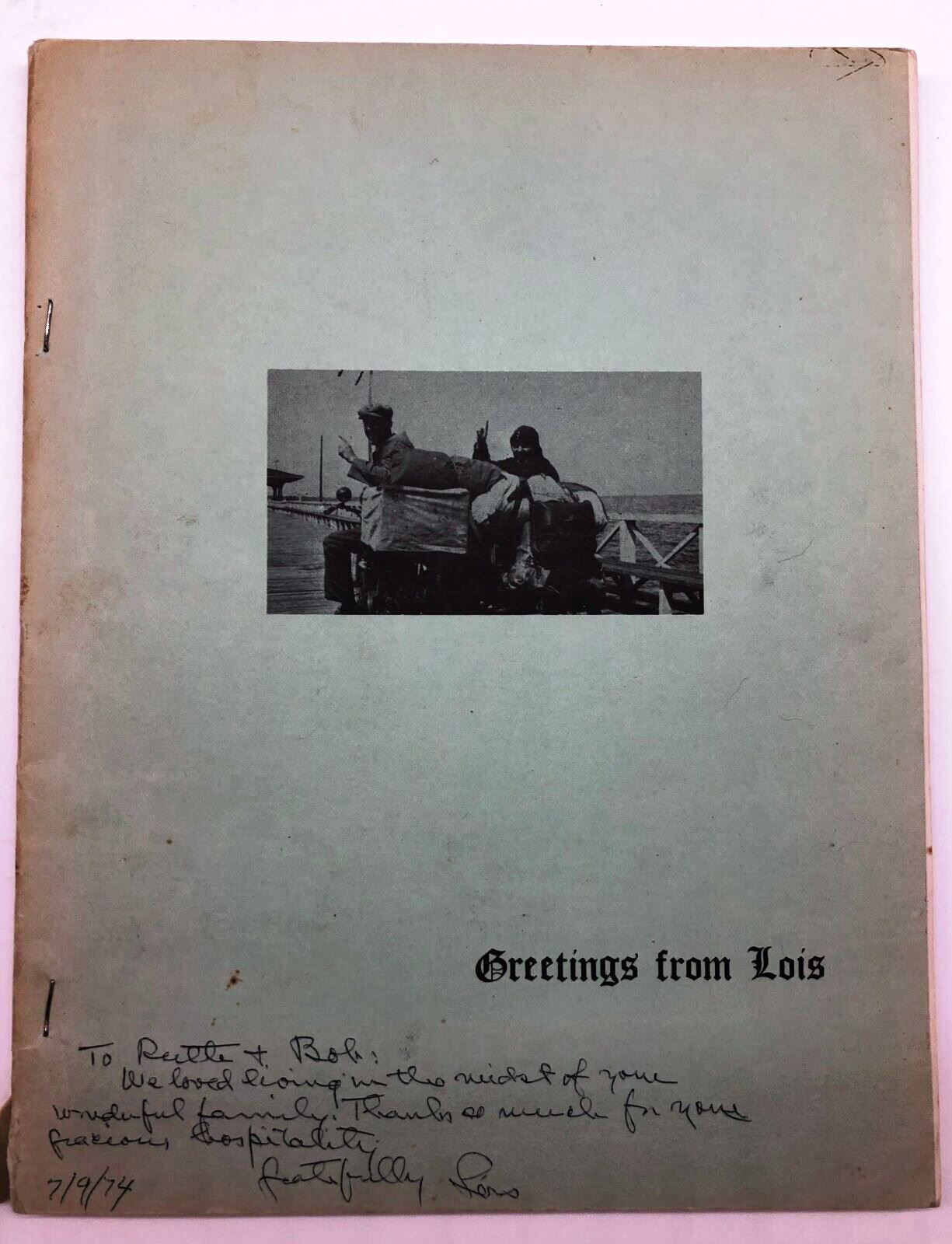 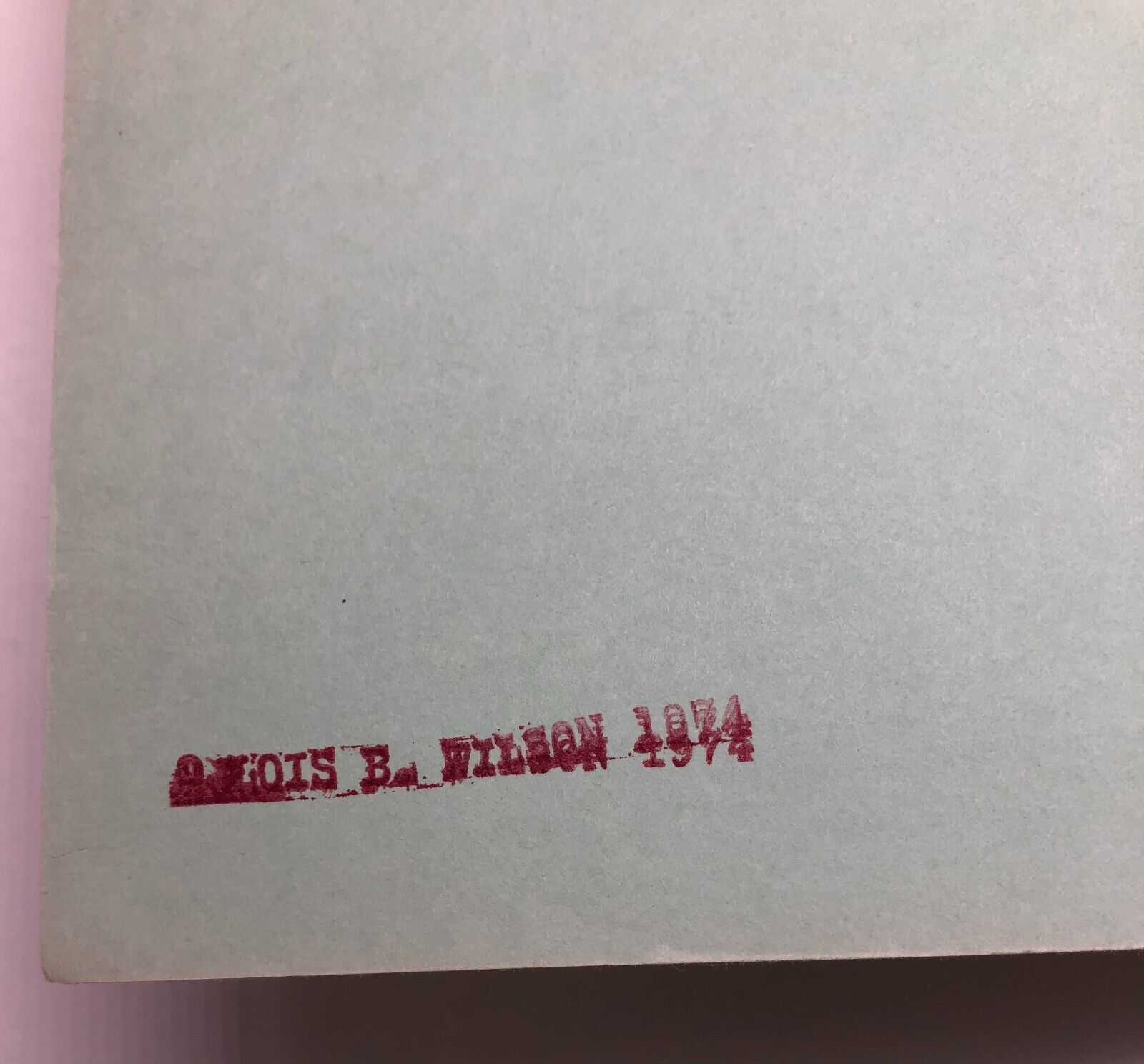 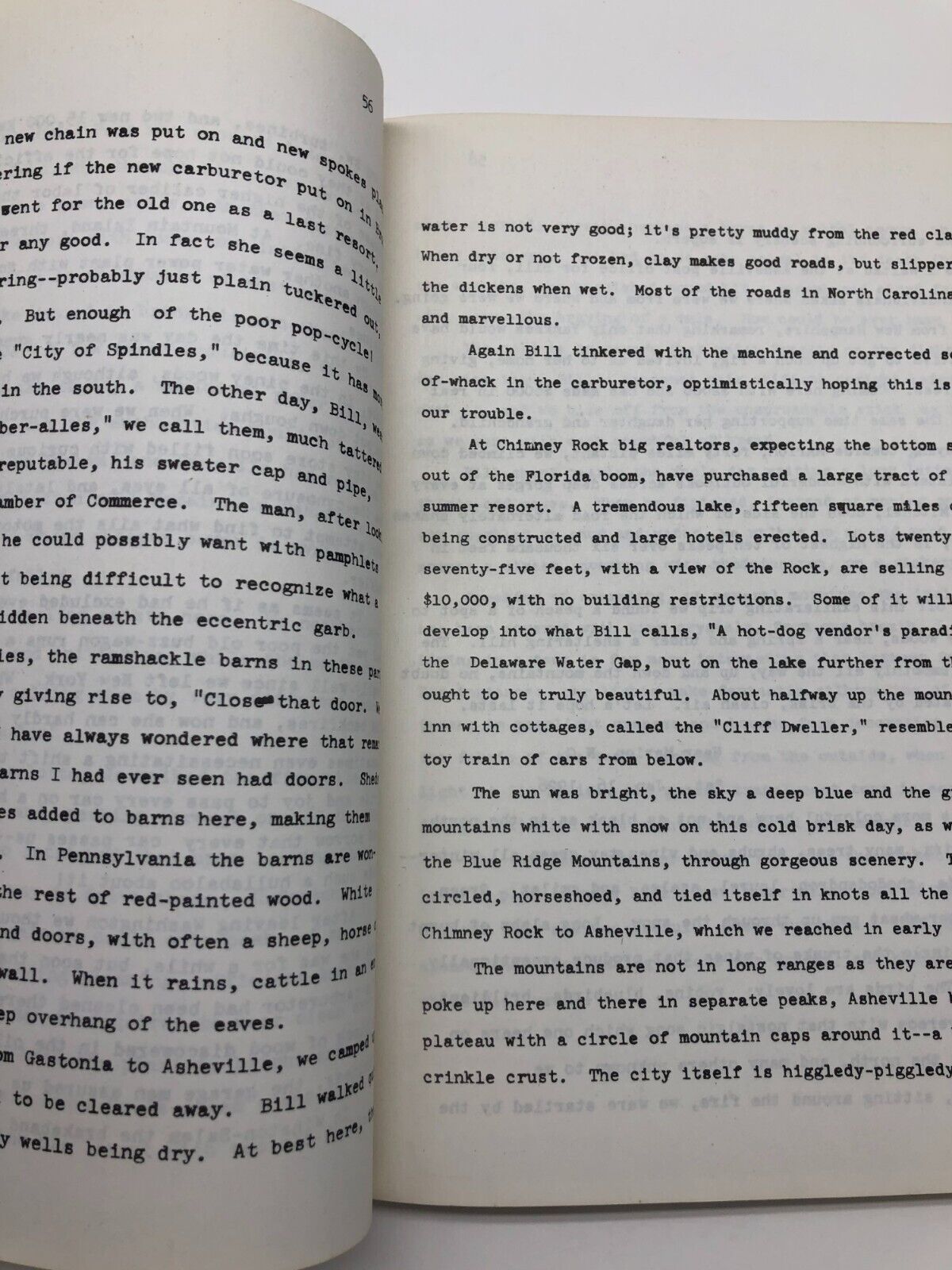 This is Lois Wilson's Original Self-Published Diary of the motorcycle trip from 1926-1928  Inscribed and Signed by Lois Wilson with letter
This is the extremely rare stapled FIRST PRINTING sent to Al-Anon and Alateen Groups Christmas 1973
Estimates are this stapled FIRST PRINTING was limited to just over 100 copies
Inscribed on cover to Ruth and Bob, gratefully Lois  7/9/74
Hand stamped on the inside cover Lois B Wilson 1974
Includes Lois' handwritten letter to Ruth and Bob Smith, with envelope, expressing gratitude
There was only one known additional printing in November 1977 spiral bound in acetate, also believed limited to approximately 100 copies for friends
Diary of Two Motorcycle Hobos
"In April 1925 Bill Wilson and his wife Lois left Brooklyn, New York riding a Harley-Davidson on a journey through the Eastern United States. Wilson was an energetic stock speculator who at age 29 was struggling to develop a method of predicting rises in stock values. He believed the secret was better information about the inner workings of publicly-held corporations. He and Lois, then 34, planned to spend as much as a year visiting factories and home offices of companies that looked promising."
"It was a bold idea, madcap and risky. They had only recently acquired the motorcycle – for weekend trips to the beach, Bill said later – but it was well-supplied. Bill had strapped his old Army trunk to the back, and filled it and the sidecar with tent, blankets, kapok-filled mattress, camping gear, food and clothing and a gasoline cooking stove, along with four volumes of Moody’s Manual on public utilities, each as large as a full-sized Webster’s dictionary. Lois wrote in her diary that they looked like travelers “bound for the Arctic with presents for all the Eskimos.” They had all they needed to live on — but only $80 in their wallets. “Our friends thought a lunacy commission should be appointed,” Bill would write later. Lois may have been skeptical about the whole scheme, but she had her own agenda. What she wanted, she said decades afterward, was to help her husband control his excessive drinking. “I wanted to get him away from New York, with bars (saloons they were called then) on many corners, and away from his buddies,” she said. “A year in the open, which we both loved, would give me a chance to straighten him out.”
"Lois’ plan to keep Bill sober was only moderately successful. She managed to keep Bill away from the bottle for weeks at a time. But whenever alcohol was present, and he took a drink, extreme drunkenness followed. One time he stepped away from Lois saying he needed cigarettes, and did not return. Left alone on the street, with no money, in a strange town, Lois waited for hours until, well after dark, she began to search from one barroom to the next. “At last I found him, hardly able to navigate–and the money practically gone!” she wrote. Bill’s plan proved more effective. By the time he’d finished his tour of the east coast, he had convinced backers on Wall Street to invest in his companies and bankroll his own investments. Soon he and Lois were back in New York, living like royalty. “For the next few years fortune threw money and applause my way,” Bill said later. “I had arrived.”
The Self-Publishing of Lois' Diary was intended to carry a powerful message to members of Al-Anon and Alateen groups around the world. It was never intended for mass distribution, and although "bootlegged" copies are available, this personal publication, in this form, with this personal inscription is an extremely rare and valuable item for AA and Al-Anon.