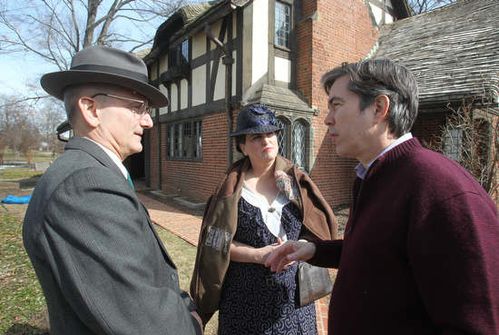 Actors Chris Gates (left) as Dr. Bob Smith and Leila Babson (center) as Anne Smith, Dr. Bob's wife, listen to director Kevin Hanlon as they get ready to film a reenactment scene for a documentary about Alcoholic's Anonymous at the Gate Lodge at Stan Hywet Hall & Gardens. 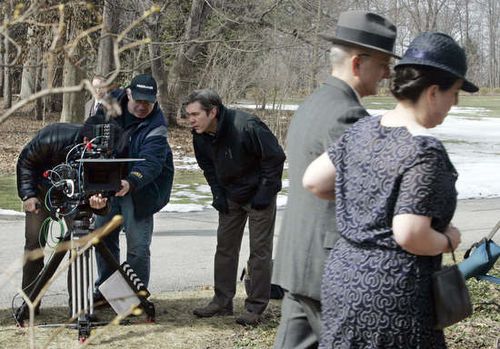 Director Kevin Hanlon (center) watches the scene through a camera monitor as actors Chris Gates and Leila Babson walk up to the Gate Lodge at Stan Hywet Hall & Gardens.

Carracino, the film's producer, lives in Laguna Beach, Calif., and has worked in the electronics business. When Hanlon suggested making a documentary about Wilson, the first thing Carracino wondered was, ''This has never been done?''

Researching the subject, he found there are no full-length documentaries about Wilson. Then he realized why.

''They are anonymous,'' he said, referring to a basic tenet of A.A.

Hanlon and Carracino found old film footage and photographs of early A.A. history, but it was sound recordings they found that really helped their research.

''As poor as A.A. is in visual history, it is incredibly rich in audio history,'' Carracino said.

The two men have listened to hundreds of hours of recorded talks given by Wilson and other A.A. members.

The film will use the voice of Wilson to help tell his story, Carracino said.

He said he and Hanlon were moved emotionally when they walked into the Gate Lodge room where the A.A. founders first met.

Hanlon said he is intrigued by the mystery of the meeting and what came of the hours of talking.

''You had one man [Wilson] who knew if he didn't speak to someone else he was going to drink, and another man [Smith] who was in a desperate condition because he couldn't stop drinking,'' Hanlon said.

''There is no way on earth those two men could have possibly known the consequence of this conversation the day it happened.''

Hanlon said the film, which is being made by their company, Page 124 Productions — a name that refers to a page in the A.A. Big Book — will be finished this spring.

It is not known how the movie will be released, but Hanlon and Carracino will pitch it to various film festivals this year.

The film is expected to be screened in Akron later this year, Hanlon said.