A section of a North Akron street will be designated Dr. Bob’s Way to commemorate the 75th anniversary this year of the founding of Alcoholics Anonymous (AA) in Akron.

Olive Street, between North Main and North Howard streets, will receive the honorary designation after Akron City Council approved the measure at its May 17 meeting. Dr. Bob’s Way runs near St. Thomas Hospital, where Sister Mary Ignatia and Dr. Bob Smith established the first specialty unit to treat alcoholism as a medical condition in the late 1930s.

MOBILE, Ala. -- In confessing to murder, Jamie Kellam Letson said she lured 18-year-old Katherine Foster into some woods near the University of South Alabama by asking her to harvest plants for a botany class, according to one man's testimony Wednesday.

Ricky Charlton, Letson's friend in Alcoholics Anonymous, said Letson described how she walked into the woods with Foster, pulled out a gun that she'd stolen from her grandmother and shot her fellow college student.

"She told me that Katherine didn't fall to the ground ... and then she shot her again," Charlton testified." ....

The History of Lone Endeavor

The history of Lone Endeavor, as related by Thom R.:

When the original manuscript was written, Bill and Ruth and another man that was helping out by the name if Hank P. (Hank wrote the chapter To Employers but relapsed when he found out that he wasn't going to be the Grand Poobah of AA because of it) were sending copies of the manuscript around the country to friends to proofread, comments, beta-test <g>, etc.

Somehow a copy of the manuscript found it's way to Los Angeles, and a man was able to read it and get sober. He wrote the letter to The Foundation in New York that is included in the story.

This was the first time that anybody ever heard of the book ALONE getting someone sober, so everyone was very excited.

The written exchanges took place that appear in the story, and Ruth put the whole thing together. It was supposedly originally planned that it was going to be going to be the 12th Chapter of the Basic Text, or so the legend goes. (Have you ever wondered WHY there are 12 Steps, 12 Traditions, 12 Concepts, but only 11 Chapters?)

The First Edition was released with The Lone Endeavor apprearing as the final story of the book. It was originally on pages 391-98.

After the coorespondence that took place that is documented in the story, a telegram was sent to Los Angeles, asking if the man would come to New York. He wired back that he would. The New York Group took up a collection amongst themselves and wired him a bus ticket.

When the bus showed up in New York, a man fitting his given description did NOT exit the vehicle.

Confused, the welcoming party asked the driver if he had seen a man of the description aboard the bus at any time.

Oh, yes, said the driver. He's sleeping it off UNDER the back seat!

Boiled as an owl.

So, the story was removed from the Second Printing. Oops. Egg on Bills' face, eh? 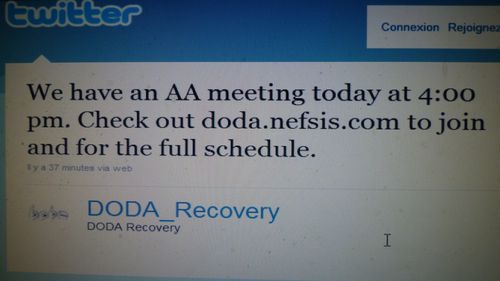