A Yale librarian who cast doubt last year on the origins of the Serenity Prayer, adopted by Alcoholics Anonymous and reprinted on countless knickknacks, says new evidence has persuaded him to retain the famed Protestant theologian Reinhold Niebuhr as the author in the next edition of The Yale Book of quotations. 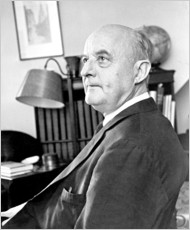 The theologian Reinhold Niebuhr is widely credited as the author of the Serenity Prayer.

Revisiting the origin of a famous prayer

The provenance of the prayer, which begins, “God grant me the serenity to accept the things I cannot change,” became a subject of controversy last year with the publication of an article by the librarian, Fred R. Shapiro, who is also the editor of the book of quotations. Mr. Shapiro had found archival materials that led him to express doubt that Niebuhr was the author.

But now another researcher trawling the Internet has discovered evidence that attributes the prayer to Niebuhr. The researcher, Stephen Goranson, works in the circulation department at the Duke University library, has a doctorate from Duke in the history of religion and, as a sideline, searches for the origins of words and sayings and publishes his findings in etymology journals. This month he found a Christian student newsletter written in 1937 that cites Niebuhr as the prayer’s author.

The prayer in the newsletter is slightly different from the contemporary one often printed on mugs and wall plaques. It reads, “Father, give us courage to change what must be altered, serenity to accept what cannot be helped, and the insight to know the one from the other.”

The contemporary version puts the phrase about serenity before the one about courage, but Mr. Goranson said in an interview, “I think the 1937 document very much strengthens the probability that Niebuhr wrote it.”

“The new evidence does not prove that Reinhold Niebuhr wrote it, but it does significantly improve the likelihood that he was the originator,” he said.

He added that unless there were further discoveries contradicting that assessment, “I will list the Serenity Prayer under Niebuhr’s name in my next edition of The Yale Book of Quotations.”

Niebuhr, who lived from 1892 to 1971, was a prophetic, politically attuned preacher who often spoke at universities and Y.M.C.A..’s, where he was more welcome than in the many churches that considered him too controversial. He influenced generations of theologians and political thinkers. Barack Obama said of him, “He’s one of my favorite philosophers.”

The Serenity Prayer was adopted by the U.S.O. in wartime, and by Alcoholics Anonymous, which uses it in its 12-step program. But even in Niebuhr’s lifetime, he faced accusations that he was not the prayer’s author. A magazine article in 1950 quoted him as saying: “Of course, it may have been spooking around for years, even centuries, but I don’t think so. I honestly do believe that I wrote it myself.”

Niebuhr’s family long maintained that he wrote the prayer in 1943, in the midst of World War II. But using Internet search engines, Mr. Shapiro found newspaper articles, pamphlets and a book that cited versions of the prayer and dated from as early as 1936. None of those materials attributed the prayer to Niebuhr (or, for that matter, to anyone else).

As a result, Mr. Shapiro (who writes occasionally for The New York Times Magazine and the Freakonomics blog at nytimes.com) wrote an article for The Yale Alumni Magazine positing that Niebuhr might have simply codified a popular prayer that was already in circulation.

The article also said: “This evidence is by no means conclusive. It is entirely possible that Niebuhr composed the prayer much earlier than he himself later remembered.”

But Niebuhr’s family, and many of his former students and adherents, were outraged. His daughter, Elisabeth Sifton, who had written a book called “The Serenity Prayer: Faith and Politics in Times of Peace and War” (W. W. Norton, 2003), published a rebuttal in the alumni magazine. She argued that her father had often delivered oral versions of a prayer before ever writing it down and that this prayer was quintessentially Niebuhr.

She also said she had cited 1943 in her book as the date the Serenity Prayer was first used because that was what she had heard from her parents. But had she known about the documents Mr. Shapiro found, she said, she might have cited an earlier date.

The debate played out in a front-page article in The New York Times in July 2008.

The evidence newly discovered, by Mr. Goranson, was in a Christian student publication, The Intercollegian and Far Horizons, in an article titled “What Makes a Strong Student Christian Association.” He uncovered it in a database search, and was able to find a paper copy in the library. He posted an item about his find on a Listserv of language scholars, and Mr. Shapiro brought it to the attention of The Times.

At the end of the article is a list of 10 attributes of a strong Christian student association. The last of them is that such an association should be “inspired by the prayer attributed to Reinhold Niebuhr.” The article then gives the version of the prayer that begins, “Father, give us courage to change what must be altered.”

The article says the list is being reprinted from another newsletter, News and Views, which Mr. Goranson said he had not been able to find in any library.

In a telephone interview, Ms. Sifton said of the new find, “I think it’s an interesting small item, which confirms what I’ve thought for some time”: Niebuhr is unquestionably the author.

“As every living pastor knows,” she said, “prayers evolve and change. You use them in one service and another context, and slowly you refine the hopes and aspirations you want to express.”